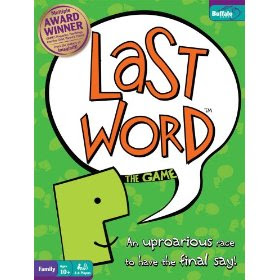 I played a new game this weekend. It’s called “Last Word.” The object of the game is to be the last person to say something relating to the designated topic and starting with the designated letter before the timer goes off. I played with my family and we had a blast.

Are you a Last Word Person (LWP)? You know, the person who always has to say the last thing in any conversation whether you know what you are talking about or not. Or maybe you will be around a LWP during the holidays and you are REALLY excited about that.

Usually people who want to get the last word in are starving for attention and a bit insecure. Sometimes they are incredibly negative too. Those are the ones that I have trouble with. LWP’s are always trying to “one up” everyone else too. They want their story or gift or experience to be so much better than everyone else’s. Most of the time the LWP tends to make your time together much less than joyful.

So What? Maybe the best thing you can do this holiday season is just shut your pie hole. If the LWP wants the last word, let them. No need to argue or stir things up. If you are the LWP, don’t be. Instead, enjoy the conversation and stories of others and don’t seek attention for yourself. Remember, this time of year should be a time of joy and thankfulness. Don’t blow it by always wanting the last word.

Even fools are thought wise when they keep silent; with their mouths shut, they seem intelligent. Proverbs 17:28 NLT

END_OF_DOCUMENT_TOKEN_TO_BE_REPLACED

What’s The Big Deal About The Bible?

What is the Big Deal About The Holy Spirit?

What’s the Big Deal About Easter?

Forward – Episode 9: Believer in Jesus to Disciple of Jesus

Forward – Episode 8: From ME to WE